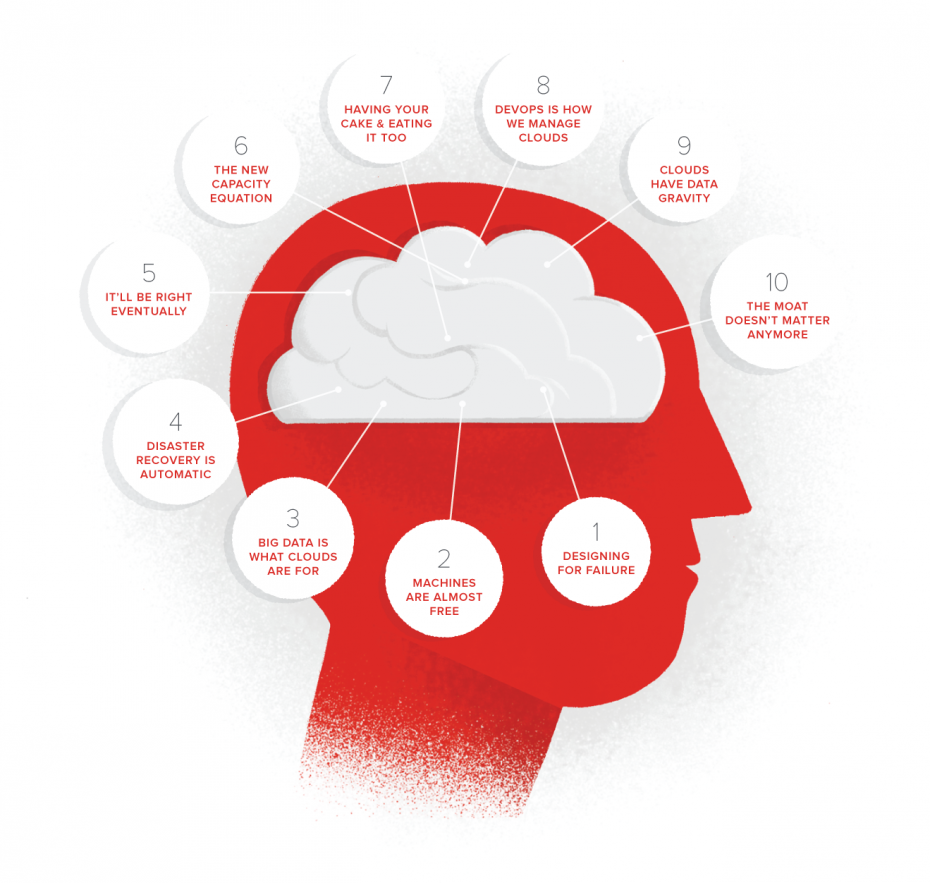 Rules of the new on-demand architecture

Cloud computing represents a significant shift in IT strategy. Now that applications run on virtual infrastructure—independent of the underlying machinery—they are portable and therefore give third-party providers the opportunity to sell computing as a utility.

This on-demand model of computing is different from its predecessor in a variety of ways, many of which aren’t obvious to the casual observer. To really understand the implications of cloud computing, we need to look at how it’s being used by early adopters and at the design patterns and lessons they’re learning.

In this report, we’ll consider 10 fundamental shifts in IT mindset that IT professionals need to undergo in order to “think like a cloud.” Some of these concepts will take years to find their way into mainstream organizations that still rely on mainframes and traditional bare-metal computing, but eventually they’ll affect everyone. If you take these patterns to heart, you’ll be far ahead of the average enterprise in your IT thinking, and better equipped to thrive in a utility computing world.

ADA – Patience. Business value does not result in quick adoption

Any big, fundamental change in thinking takes time to catch on, regardless of how promising it might be. For example, the advent of object-oriented programming. Between 1985 and 1995, NASA tried to roll out a programming language called ADA. On the surface, it looked wonderful:

So it was a wild success, right?

Unfortunately not. Less than 20 percent of the software produced by the organization was written in ADA, despite these advantages. Many developers simply couldn’t comprehend the concepts of object-oriented programming. Others resisted, wanting to stay with procedural languages like FORTRAN for which they had libraries and tricks they’d collected over time.

Proponents of the language didn’t help either: they promised too much, too soon, and avoided underlying problems such as the lack of environments and tools for experimentation. Object-oriented programming eventually won, but not before a whole generation of developers’ skills became obsolete.

If this sounds familiar, it should. It’s the path down which many enterprises are proceeding, and the results are likely to be the same: only some enterprise IT professionals will really make the switch to cloud computing. Others may pay it lip-service, then return to the fixed equipment and bare-metal mindset with which they feel more comfortable.

One way to define cloud computing is by the technologies that make it possible: virtualization, automation, auditing and accounting, a service-oriented architecture, self-service interfaces and the separation of computing from underlying hardware.

For many people, that definition means private clouds are simply “IT done properly.” That’s because the other definition of cloud computing is a business model: the cloud provider is a third-party organization, a utility like the power company, delivering when-you-need it compute cycles without upfront investment. To this group, “private clouds” are an oxymoron.

Many enterprise IT professionals see the term as an attempt by hardware manufacturers to sell them new equipment. Others are convinced they’re already running clouds in-house simply because they’ve virtualized their servers. And third-party providers see private clouds as the fabrication of luddites, delaying their inevitable loss of control over their infrastructure.

In other words, private clouds make everyone angry. The debate gets in the way of reasoned discourse, so for the purpose of this document, we’re going to ignore it. The 10 patterns outlined here apply whether you’re using a third-party cloud, or whether you’re running on a private cloud delivered as a service by your internal IT team.

The first of the 10 ways to think like a cloud is designing for failure.