How to deploy Containers on cloud.ca with Docker Machine

You’ve run containers locally, so running them remotely is just a matter of SSHing into a machine and running your container there instead, right? What happens when that machine is at capacity? Clearly you need to add another host, but stringing together API calls to create a remote host, install Docker on it, push Docker images to it, and finally run them can be a bit of a hassle.

By following this guide, you’ll install the cloud.ca Docker Machine driver, get a primer on how to use Docker Machine, and finally deploy containers to your Docker hosts.

The first thing you’ll need is a cloud.ca account. If you don’t already have an account, you can start your free trial here. You’ll receive an email after a few minutes letting you know that your environment is ready.

While your cloud.ca environment is being created for you, install Docker and Docker Machine if you don’t already have them on your local machine. Docker for Mac can be found here, Docker for Windows here, and Linux here. For a quick and dirty install, you can simply enter the following in your terminal:

After Docker is installed, grab the latest release of Docker Machine here.

Once your Docker machine is set up, you'll need to download the cloud.ca Docker Machine driver. Make sure that it's on your path so that the Docker Machine can find it.

At this point, grab your cloud.ca API key, which will be needed later on to create a remote Docker host. You can find your key by clicking the user dropdown in the top right-hand corner of the cloud.ca console, and selecting API keys. You can view your API key by clicking the eye icon. While you’re on the API keys page, it’s worth pointing out that this is where you can regenerate your API keys if you have reason to believe they’ve been compromised in some way.

You’re also going to need to know your cloud.ca service code and environment name in order for Docker Machine to know where to deploy hosts, in addition to the ID of a network in the environment you specify.

To keep all this information in one place, I suggest keeping a small script that exports these values as environment variables. You’ll see later on that this will help keep the Docker Machine commands more concise as well. Your file should be called something like ontario_test_area.sh (the environment variable names are important):

It’s recommended that you keep your API key in a script like the above so that your terminal history and clipboard aren’t carrying around copies of your API key.

Protip: Don’t commit that script and end up being the victim of a GitHub search for "API_KEY”.

Now that you’ve got everything set up, you can start deploying remote Docker hosts!

In order to create a remote host, you first need to identity its name, the region and environment to create it from, the template to use, and the compute offering (vCPUs, RAM) it should use. For example, a command with the full set of options should look something like this:

There are quite a few options, but thankfully the cloud.ca driver supports environment variables for all command line options. You can see all the available choices and their associated environment variable names by running docker-machine create -d cloudca.

To clean this up a bit, we can source the script that we created earlier and simplify the creation command to:

Waiting for machine to be running, this may take a few minutes...

(host01) Getting state of the cloud.ca instance...

Waiting for SSH to be available...

Copying certs to the remote machine...

Docker is up and running!

To see how to connect your Docker Client to the Docker Engine running on this virtual machine, run: docker-machine env host01

This way, we only have to specify the template, compute offering, and optional additional disk.

Docker Machine has served us well, but it’s time for it to step aside and let plain old Docker do what it does best: deploy containers. We can tell Docker to deploy containers on our remote service by setting it as active like so:

To make sure our host is active, we can easily check with docker-machine.

Docker is now set up to deploy containers in exactly the same way you’d deploy them locally.

To see this in action, we can deploy a ghost blog on our remote host by running:

To check if the server has started, you can read the docker logs as usual.

Pro tip: You can escape the logs by hitting Ctrl+C.

Exposing this container to the public internet will require some networking through cloud.ca. To get you started, go to cloud.ca, click on your docker host, enter its port forwarding rules tab, and create a rule from 80 to 8080. 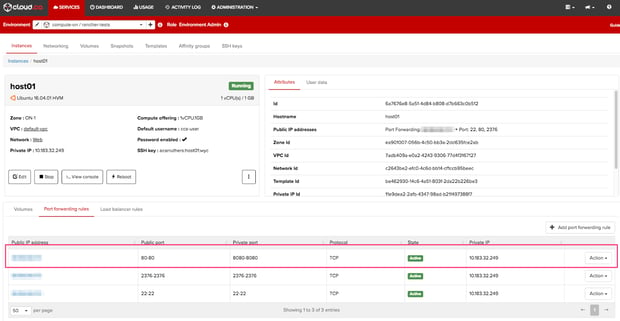 To get the public IP of your new blog, you can grab it from the cloud.ca UI, or through docker-machine like so:

Your blog will now be available on the public internet!

After you’re done with your remote docker host and you want to continue deploying containers on your own machine, you can deactivate the host by running:

To verify it was removed:

Finally, if you’re done with your remote Docker host, you can remove it with the following:

About to remove host01

WARNING: This action will delete both local reference and remote instance.

Finally, if you want to orchestrate containers using Docker Swarm, Kubernetes, or Mesos, check out the cloud.ca Rancher plugin. To get started, read our blog post on getting that set up here.